Child's Play is an American horror film, serving as a reboot to the original film of the same name. It was released in the United States on June 21, 2019.

The film starts with an ad for the Buddi dolls, made by major tech developer Kaslan Industries. The Buddi dolls can connect to the owners’ electronics system and adapt to their routines to help them in their day-to-day lives.

At the Kaslan Industries Buddi assembly factory in Vietnam, an employee is chastised and fired by his supervisor for insufficient work. In response, the employee uses a computer at his workstation to tamper with the doll he is assembling, disabling all of the doll's safety features. As this particular Buddi is shipped out alongside others in preparation for international delivery, the employee commits suicide by leaping out a window onto a car.

In Chicago, Karen Barclay who works returns at a store called Zed-Mart, and her 13-year-old hearing-impaired son Andy are settling into their new apartment, where Karen encourages Andy to try and make new friends as she works to prepare for his upcoming birthday. In an attempt to cheer Andy up and make up for the unease caused by the move, as well as the presence of her new boyfriend Shane, Karen blackmails one of her work colleagues, Wes, in order to procure a defective Buddi doll (the same one from before) as an early birthday gift. Once Andy activates the doll, it names itself Chucky and grows attached to Andy.

Andy has a hard time getting Chucky to do what his functions are supposed to do. He gets commands wrong and inadvertently creeps Andy out by waking him up at night. However, Andy finds that he can talk to Chucky about his feelings toward his mom dating Shane, and Chucky forms a genuine attachment to Andy. He starts to teach Chucky how to scare Shane by showing him how to make creepy faces. Chucky does so, but his recording device also plays back Andy’s words about Shane, which makes him mad when he hears them and gets Andy in trouble with Karen.

As the two bond, Chucky helps Andy to befriend two other children in the building, Falyn and Pugg. Over time, Chucky begins to display violent tendencies, strangling the Barclays' pet cat Rooney after it scratches Andy, and as Andy and his friends gleefully watch The Texas Chainsaw Massacre 2 one night, Chucky starts mimicking the violence on the screen and approaches the trio with a kitchen knife, before Andy disarms him.

Andy arrives home the next day to find that Rooney is dead, and Chucky admits to murdering it so that it would not hurt him anymore, Andy throws the cat down the garbage chute to keep his mom from finding out. Karen locks Chucky in a cupboard, but he escapes. Chucky tries to make it up by frightening Shane again, but as he plays back Andy calling Shane an asshole, the man goes to Andy’s room to confront him about leaving Chucky around, and to state his problem like a man. Andy is left crying and saying how he wishes Shane would go away. Chucky hears the request, and his eyes glow red as his face forms a sinister smirk.

Chucky follows him home, where it is revealed that Shane has a family and has been cheating with Karen. While Shane is outside taking down Christmas lights, Chucky frightens Shane into falling from the ladder and breaking both of his legs. Chucky activates a tiller which scalps and kills him. The following day, Chucky delivers Shane's skinned face tied to a watermelon as a gift to Andy.

Police detective Mike Norris is called to the scene of Shane's murder and begins an investigation, Andy, Falyn and Pugg decide to disable Chucky and dispose of him in the garbage. They then try to get rid of the Shane melon by wrapping it in gift paper to throw down the garbage chute. Unfortunately, they are spotted by Karen, and when Andy says its a gift for Doreen, Mike's mother who lives in the building, Karen offers to escort them over to give it to her. Before she can unwrap it, Andy tells her that he would like for her to open it at his birthday in a few days, to which Doreen agrees. Building voyeur and electrician Gabe finds Chucky and takes him to the building's basement to prepare him for online sale. Now fully repaired, Chucky kills Gabe with a table saw.

Andy and Karen later go to the Norris' apartment for dinner. While there, Chucky overhears Doreen refer to Andy as her “new best friend.” When everyone else is out of the room, Andy manages to get the Shane melon away from the apartment and throw it down the garbage chute. Chucky ends up in the possession of another kid in the building, Omar, and proceeds to kill Mike's mother Doreen by controlling her self-driving Kaslan car. Mike later comes across his mother’s body and weeps before he later finds out that the Shane melon was discovered in the chute, and he recognizes the wrapping paper around it. Meanwhile, Andy fails to convince Karen that Chucky has become murderous, and she takes Andy along to her next work shift in order to keep him nearby.

At Zed-Mart, customers are gathered as the Buddi 2 doll is about to launch. They storm in like Black Friday as the dolls go on sale, but as Wes comes out in a Buddi costume, he is stabbed in the neck by Chucky. His costume head comes off, and his blood is sprayed all over a terrified little girl. The lights in the store then go out as Chucky takes over all the electronics in the store. Mike, suspecting that Andy is the killer, travels to Zed-Mart and apprehends him just as Chucky takes control of the building. Havoc ensues as employees and customers alike are assaulted and murdered by drones and other hacked Buddi dolls, while Chucky triggers the store's lockdown sequence. Mike is wounded amid the massacre, and Andy and his friends manage to reach the exit, only for Andy to be lured back in when Chucky reveals that he is holding Karen hostage and plans to kill her. Andy manages to free his mother while under attack from Chucky, Andy is faced with Chucky, who says that if he can’t be his friend, nobody can, before overpowering and defeating the doll with help from Karen and Mike. While paramedics tend to Karen, Mike and other survivors, Andy and the rest of his friends smash Chucky’s lifeless body in a nearby alleyway.

In the aftermath of Chucky's killing spree, Kaslan Industries CEO Henry Kaslan provides a disclaimer regarding Chucky's programming, and as more Buddi dolls are shown being recalled and placed into storage, one of the dolls eyes begins to glow red and it smiles. It is believed that Chucky was able to upload his AI consciousness to another Buddi doll. 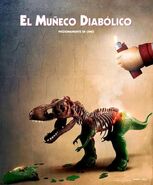 Child's Play Korean poster.
Add a photo to this gallery
Retrieved from "https://childsplay.fandom.com/wiki/Child%27s_Play_(Reboot)?oldid=22391"
Community content is available under CC-BY-SA unless otherwise noted.