Chucky is an American television series, airing on Syfy and the USA Network. Season 1 premiered on October 12, 2021. On November 29, 2021, the series was renewed for a second season which is set to premiere in fall of 2022.[1]

This series continues the overarching narrative of the previous seven films, and takes place after the events of Cult of Chucky.

A vintage Good Guy doll is found at a yard sale, and the inevitable murdering that ensues terrorizes an idyllic American town while exposing its hypocrisies and secrets. Several characters from Chucky’s past, friends and foes alike, show up to expose the truth of the killings, as well as the demon doll's untold origins as a seemingly ordinary child who somehow became this notorious monster. 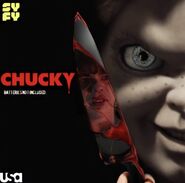 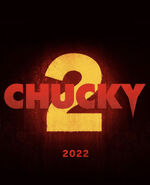