Damballa is one of the most important of all the spirits in Voodoo. He is the Sky Father, and is considered to be the primordial creator of all life.

There is an amulet in the Child's Play universe, known as the Heart of Damballa, that is capable of transferring living souls into different vessels. Damballa manifests himself as dark storm clouds, accompanied by powerful bolts of lightning.

It somehow came into the position of the serial killer, Charles Lee Ray. In 1988, he was fatally shot by the police. To escape death, he used the power of the amulet to transfer his soul into the body of a Good Guy doll. However, the spell is flawed; Chucky is becoming human, and if he stays in the doll too long he will be stuck permanently. He also can only transfer his soul into the first person he revealed himself to.

In Bride of Chucky, Damballa is summoned by Tiffany to resurrect Chucky when she uses a spell found in the book "Voodoo For Dummies". In Seed of Chucky, animatronic doll versions of Chucky and Tiffany are resurrected by Glen using the Damballa amulet. Tiffany later uses the Damballa amulet to transfer her soul into Jennifer Tilly, and Glen and Glenda's souls into Jennifer's twin babies. Tiffany holds onto her doll body after the transfer.

In Cult of Chucky, another spell is found by Chucky on the website "VoodooForDummies.com". This allows him to break his soul into many pieces and transfer them into multiple vessels at once. This spell operates differently depending on how Chucky wishes to use it. It either allows him to possess another vessel while maintaining his original vessel, or to transfer his soul from his original vessel into another vessel, leaving the original vessel devoid of his soul. Tiffany also uses this new spell to repossess the Tiffany doll.

According to Kyle, this spell only allows Chucky to transfer his soul into identical vessels, that being Good Guy dolls. However, Chucky was also able to transfer his soul into two humans, Alice and Nica. Although Nica is paraplegic, Chucky is able to stand and walk around when controlling Nica's body. But the spell is flawed with Nica, as both her and Chucky's souls occupy the same body. Whenever the body is hit in the head or catches the sight of blood, Nica is able to regain control and becomes paraplegic again.

In the Chucky TV series, Chucky discovered another spell which allows him to possess an army of 72 Good Guy dolls simultaneously. In order to complete the spell, he must corrupt an innocent child and get them to kill for him. His first attempt at getting Jake to kill is unsuccessful, but after setting his sights on his cousin Junior, convinces the boy to kill his father. The moment Junior begins bludgeoning Logan to death, the 72 Good Guy dolls spring to life.

Ade due Damballa.
Give me the power, I beg of you.

Oya shungo yenya macumba.
Give me the power, I beg of you. 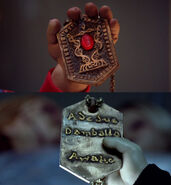 The Heart of Damballa in Seed of Chucky.

The alternate Heart of Damballa, seen in deleted scenes in Child's Play.

The Voodoo For Dummies book.

Damballa in Cult of Chucky.
Community content is available under CC-BY-SA unless otherwise noted.
Advertisement