Charles is chased down an alleyway by Detectives Norris and Santos, with both parties engaging in shooting match. Charles attempts to make it back to Eddie's getaway van, but Mike shoots him in the leg and he collapses to the ground. When another police car arrives at the scene, Eddie decides to bail on his partner despite him screaming and begging for him not to leave him behind. Norris orders Santos to pursue Eddie while he goes after Charles.

Fatally shot, Charles desperately stumbles into a toy store and attempts a voodoo soul transfer on the closest thing he could find, a Good Guy doll. Before dying, he swears vengeance on Eddie and Norris, no matter what. Officer Santos succeeds at apprehending Eddie, however he later manages to escape custody while being transferred to court to await trial. Eddie’s escape makes the evening news, which alerts Chucky, whose soul is now inside the doll. Eddie flees to the safe house he and Charles used during their crime spree, a condemned tenement in the Cabrini Green section of Chicago.

Chucky is able to convince Andy to escort him to his hideout. When Andy goes off to use the bathroom, Chucky sneaks into his house and disconnects the gas line to the stove. This noise alerts Eddie, he arms himself and approaches his kitchen, likely thinking the police have found him or an intruder is present. Out of sheer paranoia and fear, Eddie failed to smell the gas and blindly fires a shot at a noise without looking what he is shooting at, resulting in the home exploding, which claims his life.

The police find Andy nearby, and he tries to explain that Chucky told him to take him there. Not believing his story, they think Andy played some role in Eddie's death or witnessed it.

As a child in 1972, Eddie lived at the Burlington County Home for Wayward Boys. There he meets a teenaged Charles Lee Ray, whom he befriends along with two other boys. Charles attempts to mold the three boys into future killers, reading them twisted fairy tales and teaching them swear words. One day while Charles reads them Peter Pan, the House Mother enters the room and asks them how they are enjoying the story. Eddie remarks that it's "fucking fantastic", to which she demands to know where he learned such language. Eddie silently looks over to Charles, and the two wink at each other.

A few days later, Charles takes the boys on a Peter Pan-esque adventure to find Captain Hook. He leads them through the forest and to the corpse of the janitor, whom he murdered earlier. The two other boys run away screaming, but Eddie remains behind and pokes at the maggots on the corpse with a stick. Smiling, Charles tells him that he has guts for staying with him. That night, Charles is forced to leave the Burlington Home as the police arrive to investigate the murder. Before he runs off, he says goodbye to Eddie and gives him a shoebox with the janitor's severed hand inside. 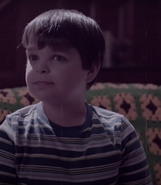 Eddie as a child in Chucky.
Community content is available under CC-BY-SA unless otherwise noted.
Advertisement