While Chucky reminisces about his first kill, he has a flashback to his 7th birthday in 1965. His parents throw him a party with kids from the neighbourhood. Another mom at the party turns the radio on, and Peter and Elizabeth gather around to listen. There is a mass murderer in Hackensack, and he killed two more people that day. The newscaster urges everyone not to go out alone at night.

That night, Charles wakes up and goes downstairs to see the murderer had broken into their house and stabbed his father Peter to death. Elizabeth rushes over to him, grabs his hand and runs with him into his bedroom. Before she closes the door, Charles grabs a pocketknife from his bedroom dresser. They hide together in her closet, and she covers his eyes as the murderer approaches them. When he opens the closet door, he discovers that Charles has stabbed his mother to death in order to “help” him. Impressed by the boy's actions, the killer gives him advice that he should always cover his tracks. 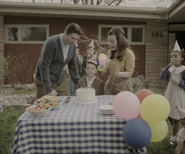 Elizabeth with Peter and Charles in Chucky.

Elizabeth hiding with Charles in Chucky.