The Good Guy Dolls are an extremely popular doll in the Child's Play universe, aimed at young children. They are created and produced by the Play Pals toy factory.

The Good Guy toy line is introduced from the popularity of the characters of a cartoon series, local to the greater Chicago area. The original doll is advertised to say three sentences, move its head, and blink its eyes. Along with the dolls, multiple accessories were made to be bought for them, such as a fireman, soldier, and construction worker set.

The cartoon revolves around Good Guys travelling around the world in a flying hot air balloon, finding lonely children in need of a friend. The ending segment of the show takes place in a clubhouse, where a man dressed in a Good Guy costume delivers a special message to the viewers.

Because of Andy's experience, the Good Guy dolls receive bad publicity and are not being bought anymore. To save what they had left, Play Pals buys Chucky's remains, to rebuild him, and prove that he was just an ordinary doll. However, upon placing his eyes back into their sockets, Chucky is resurrected. He escapes, forcing an employee to drive him to Andy's new foster house Luckily for Chucky, another Good Guy is in the household: Tommy. Tommy is destroyed by Chucky and buried in the yard under the swing set, allowing Chucky to pose as Tommy and stay in the house, watching Andy's every move.

Eight years later, the Play Pals is still going strong with new products. They believe that the years of bad publicity are far behind them, and begin discussing the revival of the Good Guy dolls, as they were their best selling product. After ignoring protests from his co-workers fearing that this would lead to more negative repercussions, the CEO Mr. Sullivan decides to revive the dolls.

Old Good Guy doll pieces are recycled into new dolls, and the remains of Chucky are in the batch. With his blood melding with the molten plastic, he is once again brought to life in a new doll body. Mr. Sullivan is then presented with the first Good Guy off the assembly line, which happens to be Chucky. When Mr. Sullivan takes the doll back home with him, he unknowingly gives Chucky the opportunity to terrorize humanity again.

After the third film, nothing more is said of the Good Guy dolls, leaving Chucky to be the only doll left. It is speculated that the Good Guy doll line was again cancelled after the discoveries of the events of Child's Play 3. 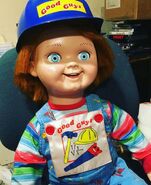 The Good Guy doll in the Construction Set.

The Good Guy doll in the Fireman Set.

The Good Guy clubhouse in Child's Play.
Add a photo to this gallery
Retrieved from "https://childsplay.fandom.com/wiki/Good_Guy?oldid=23380"
Community content is available under CC-BY-SA unless otherwise noted.