Jake Wheeler is a lonely and troubled teenager trying to find his place in the world after his mother's death.

Jake is a fourteen-year-old artist living with his alcoholic father in Hackensack, New Jersey. While shopping at a garage sale one day, Jake comes across a Good Guy doll which he buys from Mrs. Jolly, intending to use it in his sculpture made of doll parts. 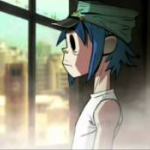