Madeleine is a patient at the Harrogate mental facility. She came to the institution after smothering her baby Joshua to death.

She attends a group session held by Dr. Foley, during which the group queries Nica's past and the subject of Chucky is brought up. To help the group make sense of the "Chucky" situation, Dr. Foley brings out his own Chucky doll. Madeleine immediately takes to Chucky as her baby, taking him from the doctor's hand for a long embrace. At lunchtime, Madeleine spoonfeeds Chucky and gushes over how she cannot believe her baby is talking already. Overhearing the conversation, Claire comes over and tells her to accept that her baby is dead. She grabs the doll but Nica intervenes, giving the doll back to Madeleine.

The next day, Angela is found dead and the therapy group argue if Nica is the murderer. Madeleine arrives late, sitting down on the couch with Chucky. She notices that there is another Chucky beside her, commenting on it as an "ugly doll". The other Chucky was sent to Nica by Tiffany, and Nica finally realizes that Tiffany was the girlfriend of serial killer Charles Lee Ray. She is convinced that the other Chucky is possessed by Charles, so to put the issue to rest Dr. Foley holds a lighter over Chucky's hand, melting the plastic until the hand is disfigured. Nica suggests burning Madeleine's doll's hand, which upsets her and she leaves the room. Nica and Malcolm follow her, but she walks out of the building before they reach her. Ashley stops the two from pursuing her, so Nica distracts Ashley and Malcolm sneaks outside. Nica watches from the window and sees Madeleine standing in front of an open grave. After she puts her ear to Chucky, she walks to the other side of the grave, where Chucky is now facing Nica's direction. The doll gives her the finger before Madeleine throws him into the grave. Malcolm then catches up to Madeleine, and the two have a brief conversation. He looks down the grave, allowing her to push him into it. After a moment, Malcolm then holds up Chucky for Madeleine and glares evilly at Nica as he climbs out.

Madeleine sits and draws a picture of Chucky as the group waits for Dr. Foley. Nica asks if she can hold Chucky, but Madeleine states that she needs to put him down for a nap and leaves to her room. Ashley closes her door as Madeleine proceeds to breastfeed the doll. Once she finishes, there is a spot of blood forming from her breast. She lies Chucky down on her bed, saying that "a boy's best friend is his mother", but then proceeds to reenact the murder of her own baby with the doll by smothering him with a pillow. Dr. Foley enters her room and asks her what she had done, to which she replies that it is just a doll. He pressures her to finally come forward with her guilt. Through tears she admits that she could not make her baby stop crying, and she could never make him happy. Dr. Foley takes the doll and buries it in a makeshift grave outside, but she keeps one shoe as a memento.

That night she is confronted by Ashley, who takes the shoe as Madeleine is on suicide watch and cannot have shoelaces. Madeleine comments that she would commit suicide if she could see her baby again, but she knows that suicides do not go to heaven. Ashley retorts that she has two children and would do anything to keep them safe. Madeleine asks if she loves them enough to kill them for their own good; Ashley does not answer, only mentioning that she would be checking on her every 15 minutes.

When Ashley closes the door, Chucky is revealed to have crawled out of the grave. The two embrace one last time before she asks if "it" will hurt, as she is ready to die. He comments that he will do his best, and chokes her to death by shoving his arm down her throat. Her body is discovered by Ashley, who finds Madeleine dead with Chucky's arm lodged in her mouth.

Madeleine surprised by the two Chuckies in Cult of Chucky.

Madeleine putting Chucky to bed in Cult of Chucky.

Madeleine with Dr. Foley in Cult of Chucky. 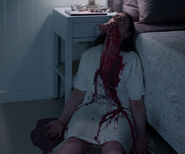 Madeleine's death in Cult of Chucky.
Add a photo to this gallery
Retrieved from "https://childsplay.fandom.com/wiki/Madeleine?oldid=20037"
Community content is available under CC-BY-SA unless otherwise noted.