"I thought you guys only said three sentences."
―Ronald to Chucky.

Ronald Tyler is a cadet at Kent Military School.

Not much is known about Tyler's parents. He has a father who is a military pilot, and one day is disappointed that there is no mail for him from his parents. The mail clerk tells Ronald because his father is deployed far away, it often takes a long time for mail to arrive. Given his upbringing, he has adjusted somewhat well to a rigid place like Kent, and is respectful of the likes of Colonel Cochrane. Although he is well-disciplined for his age, he is still a child and is shown to enjoy toys, like the Good Guy dolls, as his eyes light up after seeing a Good Guy commercial on TV.

Tyler visits the main office, in hopes of receiving a letter from his dad. Although nothing came for him, he is asked to deliver a package to Andy. While taking it to Andy's room, he drops it by accident and it falls down the stairs, causing a rip. When he peers through the rip, he saw the words "Good Guys" on the box. Knowing what was inside, he took it to the storage room so he could play with it. As he is looking at the doll inside the box, it suddenly comes to life. The doll, Chucky, realizes that he no longer needs Andy for a new body and introduces himself to Ronald.

Chucky is getting ready to transfer his soul into Ronald's body, and disguises his plans as a game called "Hide the Soul". Unfortunately for him, Colonel Cochrane finds Tyler with the doll and, as toys are against the rules, takes him away. That night, Chucky arms himself with a knife and wanders the school halls in search of Tyler. Much to his dismay, Tyler is playing a game of Hide-and-Seek, and when he finds him in a closet, he has no time to cast the ritual as they were found by two girls, who take him away. The next morning, Andy approaches him and asks him about Chucky. Thinking that Andy wants Chucky all to himself, he tells him that he is just jealous that Chucky did not pick him first. Andy decides to give him a pocket knife to use against Chucky, should he try to harm him again.

When the annual paint ball war begins, he sneaks out of camp to play with Chucky. Deep within the woods, Chucky reveals his true plans to the boy, whom realises that Chucky is not a "Good Guy" after all. Remembering the pocket knife, he withdraws it and stabs Chucky in the shoulder, and makes a run for it. Throughout the night Chucky pursues Ronald, and finally traps him in a carnival haunted house. There, Andy and Kristen battle Chucky, but Kristen is shot injured in the leg and Ronald and Andy are separated. Chucky knocks Ronald unconscious from the top of a mountain of skulls, and prepares the ritual. Luckily, Andy is able to climb up the mountain of skulls that they are on. Andy shoots off Chucky's arm and shoots him in the chest, subduing him, and after a brief struggle, cuts his hand off and kicks him off the mountain. Chucky falls into a giant fan, ripping him to shreds and finally killing him.

What becomes of Ronald Tyler is never stated at the end of the series. Though possibly because of the years that past, Chucky does not attempt to go and find Ronald Tyler when he is revived again in Bride of Chucky. Since Ronald Tyler has a father, he most likely did not suffer the same fate as Andy, being sent to foster home after foster home. Despite this, he is only few who knows about the existence of Chucky as a killer doll.

Tyler with Chucky in Child's Play 3. 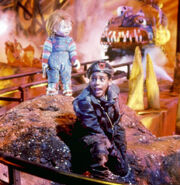 Tyler with Chucky in Child's Play 3.
Community content is available under CC-BY-SA unless otherwise noted.
Advertisement